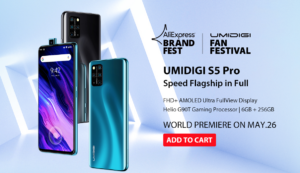 Store Description: Umidigi is one of the Best Chinese Smartphone companies that is up and coming. They make amazing budget Chinese smartphones that are feature rich and easy on the wallet as well!

Do you know for under $100, there are these awesome phone deals that you wont believe! Check out our curation.

There has been a surge in the market of Chinese Smartphones. The min reason is that these phones are very high functioning android phones. They even come for much cheaper price in comparison to other smart phones. The features from facial recognition to awesome cameras, these phones have it all but for a much reasonable price. As we go into 2020, let us look at some of the Best Chinese Smartphones in 2020.

You can check out the latest Chinese phones on Amazon, listed below! Phones like One Plus 8T 5G are coming soon, which we’ll be reviewing soon.

The One Plus 8 Pro is One Plus’ latest flagship device. It’s got a legup in terms of features compared to the One Plus 7. It’s on top of the list because it’s probably the best Chinese smartphone in the market currently.

The One Plus 8 Pro is a premium flagship with a 6.78-inch AMOLED display. It has wireless charging and a IP68 waterproof rating, which means water can do nothing to the One Plus 8 Pro.

The One Plus 8 Pro has a Quad camera setup with a 48-megapixel main camera. The battery is a 4510 mAh. This is the best Chinese smartphone in 2020.

The One Plus Nord is One Plus’ answer to the Apple’s SE. Making a cheaper phone with flagship specs. The last time One Plus released a budget device, it wasn’t successful. The Nord on the other hand is a pretty powerful phone.

The Nord has a 6.44-inch OLED display with a 20:0 aspect ratio and a 90Hz refresh rate. The processor is a Qualcomm Snapdragon 765G which is a bit of a let down compared to other features of this phone.

The camera is a quad setup with a wide-angle main 48-megapixel camera. The cameras on the Nord are breathtaking for a budget device. The selfie camera is a 32-megapixel shooter.

The battery is a 4115 mAh, which is pretty decent and the battery life is astounding. The Nord does not have a headphone hack.

One of the fastest growing smartphone brand is Realme. The Realme 6 is a budget phone, cheaper than the One Plus Nord. It comes packed with some seriously powerful specs.

It has a 6.5-inch IPS LCD display with Corning Gorilla Glass 3. It’s powered by the Mediatek MT6785 Helio G90T chipset which is a great chipset for the price.

It comes in two RAM options – 4GB and 6GB and 128GB of internal storage. The cameras are a quad setup with a 64-megapixel camera. The selfie camera is a decent 16-megapixels.

The 4300 mAh battery is ample of a phone of this kid. If you are looking for a Cheap Chinese smartphone, this is it.

I’m honestly excited about the Realme X50. The Realme X50 is the latest Realme flagship with some amazing specs.

It has a 6.57-inch IPS LCD display. The phone packs a 120Hz refresh rate, which is amazing! Running on Android 10, it also packs a Snapdragon 765G.

128GB of internal storage with 6GB or 8GB RAM option. It has a quad camera setup with a 48-megapixel main camera. The selfie shooter is a 16-megapixel lens. The 4200 mAh can be charged up to 70% in 30 minutes, thanks to the 30W fast charger.

This is one of the latest Chinese smartphones that is super sought after.

You can’t talk about Chinese smartphones and not talk about Huawei. Huawei arguably make the most underrated smartphones in the market. The P40 Pro is a mind blowing device. Mind you, it’s expensive.

It has a 6.58-inch OLED screen with a 90Hz refresh rate and HDR 10. Runs on Android 10 without Google Play services but with workarounds available.

Runs on the Kirin 990 5G chipset that is super quick and one of the best in the business. It has a 8GB RAM with up to 512GB of storage available.

Has a triple camera setup with a 50-megapixel main-camera with Leica optics. This is arguably the top camera phone in the world. Even better than iPhone.

The front selfie camera is a 32-megapixel shooter. The 4200 mAh battery comes with a 40W charger and can reverse charger with 27W of power.

The Xiaomi Mi 10 fights in the category of the One Plus 7′ and One Plus 8′. But it’s still a strong contender.

It has a super AMOLED 6.67-inch display with Corning Gorilla Glass 5, HDR10+ and a 90Hz refresh rate. It runs o nAndroid 10 with MIUI12. The Qualcomm Snapdragon 865 is the processor and we all know it’s the king of chipsets for a flagship device.

The quad camera setup has a 108-megapixel main camera and the selfie camera is a 20-megapixel shooter. It has under the display fingerprint display.

In the flagship category, Xiaomi might not be the pick of the choice, but when it comes to budget devices, there is no beating the Redmi Note 9 series.

Its the cheapest budget device with best specifications. It has a 6.53-inch display with Cornina Gorilla Glass 5. It has Android 10 and runs on the Helio G85.

Comes in 3GB/4GB versions with storage up to 128GB. For a budget device, the cameras are super awesome with a uad setup with a 48-megapixel camera.

It has a front selfie camera at 13-megapixels. The battery on the Note 9 is unbeatable with a 5020 mAh with a 18W fast charger.

Another mid-range Chinese smartphone that is expected to make waves in 2020 is the Oppo Reno4. The Oppo Reno4 will pack a 6.4-inch super AMOLED screen. It has Android 10 with Qualcomm SM7125 Snapdragon.

The 8GB RAM and 128GB of storage is ample for this phone. The quad camera is as good as the One Plus series with the main camera being 48-megapixel. The front camera is a 32-megapixel shooter.

It has a 4000 mAh battery powering all of this. This is Oppo’s best attempt at a mid-range flagship making it one of the top Chinese smartphones in 2020.

The Realme X2 Pro is another mid-range model from Realme. It has a 6.5-inch AMOLED display with Gorilla glass 5 and a 90Hz refresh rate and HDR10.

The Android 9.0 might be a bit outdated, but can be upgraded to the 10. It has the Snapdragon 855+ running the show behind the scenes.

It has a 12GB version RAM and 256GB of storage. The quad camera setup includes a 64-megapixel main camera and a 16-megapixel front camera.

Umidigi is one of the best cheap Chinese smarptone manufacturers and they have been gaining in prominence in the past few years. Some of their popular models that has hit the Chinese market in 2020 are the F2, Power 3, A3S, A3X, F5 Pro and more.

The Umidigi F2 is probably the best Chinese camera phone out there.

Check out the Xiaomi store on Amazon

Check out the Ulefone Store on Amazon

Check out Umidigi phones on Amazon

Blackview is a company that was founded in 2013 by a veteran entrepreneur. They got covered by Forbes Magazine in 2017 for making a super rugged smartphone. In these years, Blackview has made a name for themselves and in 2020, they have some pretty amazing offerings. It’s one of the best Chinese phone brands if you are looking for a homegrown Chinese smartphone brand.

Leagoo was started in 2009 and they are official partners of the English football club, Tottenham Hotspur. They make smartphones, smart home appliances, smart lighting equipment and so on. They are one of the top Chinese smartphone brands and arguably make the Best phone in China, the M13.

Why are Chinese phones cheaper?

Chinese phones are cheaper because of Chinese manufacturing capabilities. They have the power of economies of scale, which means they are able to produce a lot more phones for much cheaper. From technical know how to supply chain to distribution, China knows the most efficient way to make and distribute phones.

What is the best cheap Chinese smartphone?

I’ll go with Umidigi. Umidigi as a brand is becoming quite popular in China and they have capabilities to manufacture smartphones, earbuds, smartwatches and more. As they are still not at the level of Xiaomi or Huawei, their pricing is quite reasonable, but their smartphones are pretty amazing!

Brands like Xiaomi and Huawei are Chinese as well. They are reliable right? In fact, these phones are super popular worldwide. Chinese smartphones are reliable, but when it comes to very new brands in the market that has no name, you need to be a bit careful, as their smartphones might not be up to a certain standard. \

Now you have a list of phones to consider before investing in your new smartphone. Only be sure to check the network compatibility and you can there compare and contrast the features of these smartphones with any other flagship which comes at much expensive price. The Chinese Smartphones work incredibly well and also are well within the budget they are already giving brands like Apple serious competition. It is always wiser to choose a phone depending on features and price over a certain brand name.

Aliexpress vs Alibaba : Which is Cheaper?

Getting your brand on our site