After Amazon’s purchase of Ring for a billion dollars, the Wifi doorbell space has become massive. Ring is a video doorbell company that debuted its product in Shark Tank, where they received no funding. But after Amazon’s interest, they have gained prominence and have introduced to the world, the concept of video doorbells. Aliexpress’ Wifi Doorbell cameras work exactly like Ring and with the same app features but at a SUPER cheap price.

The SmartYiba is more of a traditional intercom compared to the first two that we’ve covered. Here is how it works

The Jeatone is similar to that of the Smart Yiba, but slightly more expensive, that is justified with some upgraded features. Here are the features that makes the Jeatone stand out

Daytech Wireless is one of the new age doorbells that works with a smartphone. If you want a simple modern age video doorbell, then this is the one for you. Here’s how it works.

Eken is one of the better-looking video doorbells out there. Here are its salient features

HK Vision is a very popular Chinese doorbell and alarm company and they are known for their uber powerful cameras.

The Tuya 1080p Doorbell is super affordable and has a 166 degree viewing angle. It can display in 1080p HD. There is the two way talk feature which lets you talk to the person beyond the door.

Supports motion detection, where a notification is sent to the app.

What to look for in a wifi doorbell camera:

What are the best video doorbells?

The Chinese make some pretty amazing video doorbells that don’t break the bank and that are also pretty feature rich. Here are a few of them

See also  Xiaomi vs Samsung in 2022 | Battle of the Flagships

Can video doorbells be hacked?

Like most technology and digital equipment, doorbells can also be hacked. This is because they are connected to Wifi and Wifi can always be hacked. Recently, Ring doorbells came under the scanner for being hacked through Wifi. So yes, they can be. But there are precautions against getting hacked.

Video doorbells are safe and keep your home pretty secure and protected. They are pretty safe. But you need to take extra precautions relating to keeping your app, password protected and also having a separate Wifi connection for your doorbell that cannot be hacked.

Do all video doorbells require WiFi?

Some do and some don’t. To be honest, it’s an absolute waste of space to keep recording continuously. Modern video doorbells have a motion detection feature, that starts recording when it senses that a person is in front of the door.

Which is better ring or nest doorbell?

I’m not in favour of either Ring or Nest. Why? At the outset, they offer the same functionality at the same price. But you get the same functionalities for a much cheaper price with superior design from brands like UCYBO, Jeatone, Eken and Daytech Wireless. At the end of the day it’s a Smart Doorbell and there is no “premium” feature available in Ring or Nest that isn’t available with the brands mentioned above. This is why I wouldn’t suggest either and it’s better to go for these unknown brands.

Do video doorbells get stolen?

Video doorbells do get stolen, especially by thieves who have staked your house and want to commit a robber soon. The best way to protect your doorbell is to enclose it with a hard case on the outside that cannot be broken easily without using big machinery and tools. This is a simple addition that will keep you safe and will alert you and your neighbours in case somebody is forcefully trying to steal your doorbell. 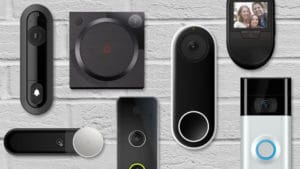 After Amazon's purchase of Ring for a billion dollars, the Wifi doorbell space has become massive. Ring is a video doorbell company that debuted its product in Shark Tank, where they received no funding. But after Amazon’s interest, they have gained prominence and have introduced to the world, the concept of video doorbells. Aliexpress' Wifi Doorbell cameras work exactly like Ring and with the same app features but at a SUPER cheap price.