Most of the people are not able to buy Smart TVs due to its high price. There is surely a solution to it, and that is the Android TV boxes. With the help of these boxes, you will be able to transform your ordinary TV into a Superb Smart TV. You will be able to have access to various applications and games on your TV using it. Other than this, you can also view live streaming movies, sports, and shows. The device will also help you in establishing a nice and sound internet connection.

Now, choosing the best box for you might be a tough one, but it will not be the same after you read the complete article. Here we are going to provide you the details of top 5 Chinese Android TV boxes along with three of the best stores to have them.

The store is there in Aliexpress for as long as 2 years. They have only one goal, and that is to provide superior quality of home entertainment. The excellent hardware and software combination of Xiaomi stuff is another reason for their classy products.

The products are shipped all around the globe. They have great buyer protection and customer service for providing the best services to their users.

The next great brand in Aliexpress which supplies quality Android TV boxes is the Vontar Official Store. The company was established in the year 2012, and since then they are supporting their clients with quality products. They are evolving with time and creating new generation boxes for the users.

They tend to focus on the latest technological innovations which are the mainstay of their revolutionary devices. They fulfill each and every multimedia playback demands of their users. They are indeed redefining the whole process of interacting and controlling the media content.

This is quite an old brand established way back in 2008. Since their emergence in the scene, they quickly became one of the global leaders in the development processes of next-gen computers.

They are now a stalwart in media hub technology and portable PC technology. Using the boxes, you can easily stream, 1080p videos to your TV. You can even extend the capacity of the boxes using TF card of up to 128GB.

The latest addition of the H96 Series is the super powerful Android 9.0 version that ships from China, Spain, Russia and France. It comes in numerous colours and storage capacities. It comes with numerous options and features we’ll list down below.

The Vontar X96 Mini has been updgraded to Android 9.0. It’s still is one of the most popular Aliexpress Android TV boxes.

The Android 9.0 Mi TV S box is known pretty much in the Android TV Box space. Xiaomi is best know for electronics and their TV box comes at a premium price of around $50. If you buy from this store, they enabled shipment from Poland, Spain and Russia.

The Vontar X96 Mini is a super awesome, teeny-tiny Android TV Box that packs quite the punch.

The A95X Max is a power packed Android TV box. It runs on a Quad-Core CPU. It has a 2.0Ghz High-Speed frequency. It has a 4GB RAM which enables high-speed and high graphics gaming. It displays videos in 4k at 60fps. It has a 4.2 Bluetooth as well. 128GB of space ensures you can download numerous apps. The dual-band Wifi transmission ensures faster internet connectivity and better real-time video buffering.

The HK1 is one of the most popular Android TV boxes out there. It runs on Android 9.0 and has 64GB of storage. The 4GB of RAM ensures everything is blazing fast. It works with Bluetooth 4.0 and plays videos in Ultra HD 4k.

The Ugoos X30 Pro is available on the Vontar store on Aliexpress is an Android TV box with a lot of features packed into a one budget device. Here’s what makes this Android Box amazing.

The Tanix TX6S is one of the first Android 10.0 smart boxes on Aliexpress. It’s already a best selling Android TV Box on Aliexpress.

Check it out on Aliexpress -$16

The Mi TV Stick is definitely not a TV Box, but it performs that role beautifully by taking up very little space and at a budget as well.

Firstly with over 24,000+ purchases, it’s the best selling Android TV Stick on Aliexpress. It costs around $37. But most of you are wondering, where does it lack?

Let’s get to that in a bit. It works with Android 9.0 and can be controlled through voice. All you have to say is “Ok Google”. It can help cast and also has the top entertainment apps that can be downloaded.

You get a remote too to control the settings. As long as your TV has a HDMI stick slot, you can make any TV a Smart TV.

It has 1GB RAM with 8GB of Storage. That’s mostly for the apps. Of which you can download a LOT. It’s super cheap, makes your Smart TV display 4K video and has no cons whatsoever. The best product in the list by far.

What is an Android TV Box and why do you need one?

In simple terms, when you can’t afford a Smart TV, you get an Android TV Box.

I have a Mi Smart TV at home and I love it. But not too long ago, I didn’t have a TV at all, but had a massive monitor that could display stuff. It was pretty useless because I couldn’t access the internet, or cools apps like Netflix and so on.

The solution was right there, an Android TV Box.

Because they are based on Android, you can access the Playstore and Google’s services.

If you don’t have a Smart TV and want your monitor or TV to become smart, then you can get a much cheaper Android TV box to access the same features.

The portal is huge. Some of the big names like VONTAT ships their boxes in less than 1 week and arrived to your destination in less than 3 weeks. The products above are well curated based on store reviews, order processing and how established the store is.

How to buy an Android TV Box

Here are some quick tips on buying an Android TV Box.

Android TV Boxes come in numerous sizes, types and with different features. Here is a primer on choosing a good Android TV Box.

An Android TV Box is a whole system that replicates a Smart TV. You need to make sure that your Android TV Box has enough firepower to run all the apps and the systems. A good processor for an Android TV Box at least has 1.5 GHz Quad-Core CPU. Anything better than that is obviously recommended.

The standard USB that is prevalent in most electronics these days is USB 2.0. But the future standard is USB 3.0 which is faster and better. If you will be using external devices with your Android TV, then it’s best to get a USB3.0 Android TV.

Storage and space are super important for an Android Box as the OS for the Android TV Box is built-in to the system. So the OS takes up a lot of space. Just like any other device, the RAM is also an important factor to ensure that your Android TV runs smoothly. A good configuration for RAM and Storage is 4GB and 32GB respectively. This is the minimum requirement.

Everybody wants fantastic video quality, but it’s not only about the display device that can render it, but also the software. A good Android TV Box should be able to play at least 4k videos. So make sure the Android TV Box you are going to buy supports 4k.

An Android TV obviously runs on the Android OS. You’ll need to ensure that the Android OS powering the device is close to the latest. It doesn’t have to be the latest. A good measure is, anything after Android Lollipop is a pretty good pick.

There are Android TV boxes that work without Bluetooth or Wifi. Some Android TV boxes have only the Ethernet Port. What if you don’t have any extra Ethernet cable to use? In that case you will need Wifi. Also, Bluetooth is required to transfer files from your laptop to your TV box if you require.

An Android Tv is essentially a Tv that has many features of the Android platform pre installed and can support various apps like Netflix and Amazon prime without the need for an external device.

An Android Tv box is a third party device that can be connected to your regular Tv to access such apps.

An Android Tv box can be connected to a regular non smart Tv via HDMI. Once connected a user can access apps such as Netflix and Amazon prime and stream their content through the Android box onto the Tv. It gives a normal Tv smart features.

Yes, most Chinese Android Tv boxes will support Wi Fi in order to stream content from online platforms like Youtube. Such platforms need the internet to function therefore most boxes come with Wi Fi.

With an Android Tv box you can install all your favorite online content streaming apps in one place for easy access and also connect to various internet radio stations to stream music. Most come with a voice controlled remote as well. 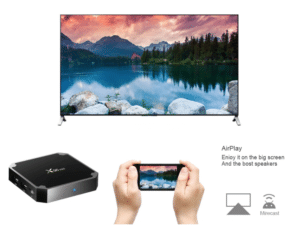 Most of the people are not able to buy Smart TVs due to its high price. There is surely a solution to it, and that is the Android TV boxes. With the help of these boxes, you will be able to transform your ordinary TV into a Superb Smart TV. You will be able to have access to various applications and games on your TV using it. Other than this, you can also view live streaming movies, sports, and shows. The device will also help you in establishing a nice and sound internet connection.