The eBikes market is getting so big that it might become a mode of transport for many people even before cars. eBikes has become the go to because of the environmental benefits, no fuel requirement and the limited space it takes.

There are so many eBike manufacturers and they can get quite pricey. In recent years though, a group of super affordable eBikes have been released and it’s all coming from China.

China has made motorcycles for a very long time because of the massive domestic requirement for motorbikes. Making eBikes was just a natural progression and the best Chinese eBikes can give the other eBike manufacturers a run for their money.Can they be trusted? Are they legitimate?

Chinese eBikes are highly tested and go through rigorous processes and made by big organizations. These aren’t run of the mill hobbyists making eBikes.

So what are the best Chinese eBikes? Well let’s check ’em out!

Bafang is one of the biggest eBike chinese brands in the market. Bafang is not only a big brand in China, but also worldwide. It has massive popularity in the European Union. There are many Bafane eBikes such as the AGOGS Max-R, Apache Yamka, Agogs Max, CRUSSIS and more.

Bafang bikes range from $2000 to $3000. Bafang’s eBikes are made for men and women with different designs and styles.

They have close to 60 models to choose from. The Bafang bikes come with different watt motors of 750W and 1000W.

It’s made of Aluminum Alloy body and has a charging time of 5 hours. One can get a range of 30km to 45 kms.

The DYU D2 is a super popular Chinese eBike. It’s one of the best selling Chinese ebikes in the market that is priced really well at $550.

This is a small-ish eBike that is good for within city travel for close distances. It’s made of aviation grade aluminum alloy. It weighs 15 kgs and has a weight capacity of 120 kgs.

It can tackle a hill climb of up to 15-degrees with ease. It has a 5.2AH battery.

You can travel up to 20 kilometres on a single charge and the max speed is about 15km/hr that can be controlled through the app.

It can be folded and placed inside the boot of a car as well. It’s IP54 waterproof.

The Qicycle is very similar to the DYU D2 in terms of design and functionality, but it’s a tad bit more expensive. At $978, it’s almost $400 more than the D2.

This is a much faster electric bike that can go up to speeds of 40km/hr. It has large 20-inch wheels and can be ridden without electricity as well.

It’s made of aluminum and is perfect for handling in an urban environment. There is a large photosensitive display that shows the battery level and the speed.

There are three battery modes that control the speed and the battery life which is nifty! It comes with a lamp and a left and right power-off brake signal lines.

The bikes can be customized to add any baskets or other accessories.

Fitrider’s iVelo is available on all the big platforms. It is a bit expensive. It generates 250W of power and can be folded as well.

It’s a bit short for people who are over six feet. It has a front display that showcases the speedometer and the battery levels. That display has a light attached to it for illumination during the night.

The brakes are attached to a LED light on the sides that run red in colour when pressed. This is a safety feature that’s very important at night.

It’s super easy to detach the battery pack for recharging it. The seats can be adjusted for height.

It’s easy to ride when not in electric mode, it’s quite lightweight. The tires are 14-inches in size and it’s perfect for local urban travel for short distances.

It’s got a dedicated app to set the speeds and check other pertinent information.

The Inmotion P2 is another classic from the Chinese eBike market. At $857, it’s somewhat of a mid-range eBike. The maximum speed it can reach is 30km/hr.

It weighs around 19 kilograms, which is pretty okay to ride with. The mileage depends on the mode that is being used. It can give a 80km travel distance on a single charge if its on economy mode.

It’s got a climbing angle limitation of 12-degrees, anything steeper, it will not pull through. It can withstand a total weight of 120 kilograms.

The 36 volt, 23.7 Ah battery takes 6 hours to completely charge. The tires have a dimension of 12 inches.

It’s got a double disc brake.

Fujita is by far the biggest bicycle manufacturer in China. Fujitas eBikes are a lot more traditional looking and are similar to mountain bikes but fit with power. These are mean machines, which are worth every single penny and are a legitimate vehicle.

Fujitas eBikes number up to 25. They come under the manufacturer name of Pedelec. The only concern with Fujita ebikes is their availability. It’s not easy to find them online.

They make eBikes of all types. With big tyres, big battery packs and smaller ones as well. A similar brand to Fujita is Sheng Milo that makes super affordable eBikes that are very popular on Aliexpress.

These bikes cost around $1500. They are made of Aluminum alloy and can go as fast as 40 kmph and have a driving range of 90kms.

It’s a mountain bike and an electric bike in one. Apart from the usual features it has a display monitor, electric handlebar, speed gears, shock absorbers and brake levers.

It’s got powerful lights for night rides and LED taillights for safety. It’s one of the best Chinese eBikes on Aliexpress.

The R8 eBike is their most popular offering. It’s aesthetically pleasing, looks like a traditional bike but has a battery attached to it.

With 26-inch tires and 20 kgs in weight, it’s  pretty similar to a rugged mountain bike. With shock absorbing seats, it’s one of the comfortable e-bikes out there.

Golden Wheel is a massive eBike brand from China that is hugely popular in Europe where they’ve been active since 2012. The eBikes they sell are under the brand name of Totem.

Zhengbu is another brand that became popular for creating the world’s first electric, folding bike. After their announcement, the other brands got in the action. Zhengbu ebikes are varied. They make the mountain bike variety and the urban traveller that is smaller and less powerful.

Zhengbu’s ebikes are available on Aliexpress.

Are Chinese Ebikes any good?

Chinese ebikes withstand better battery and longer rides than usual ebikes due to their motor capability. This is because the Chinese ebike riders require more power to run the ebike for several hours because they usually prefer taking ebikes wherever they’re travelling, especially related to work.

How long do ebike batteries last?

A well maintained ebike’s battery will last for around 2 to 4 years. If the bike is equipped with a lithium battery then it might slow down overtime and lose its power even when it’s not in use. Maintain your ebikes properly for them to last longer.

How to charge your ebike?

Here are the steps you need to follow to charge your ebike:

Things to look for when buying an ebike:

Here are some things you would want to consider before purchasing an ebike:

Cost: Cost depends on the specs of your ebike. If your bikes have lower performance then it might cost you around 1500 to 2500 RMB otherwise 2500 to 4000 for a high performance model. 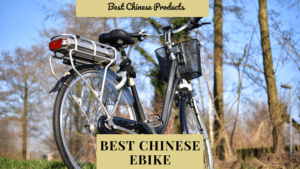 China has made motorcycles for a very long time because of the massive domestic requirement for motorbikes. Making eBikes was just a natural progression and the best Chinese eBikes can give the other eBike manufacturers a run for their money.Can they be trusted? Are they legitimate?

Where to buy Fake Airpods and its Cheap...

Amazon FBA warehouse locations in the US |...

Chat with me on Linkedin