Contrary to popular belief, Legos can be an entertaining activity for adults also. Sure, they are ideally made for kids, but the whole act of spending time and imagination into creating something out of mere pieces can feel like quite an accomplishment. But, Legos are expensive.

While it is completely worth it, there have been many alternatives for a much cheaper price that gives (almost) the same delight as legos. You might not hear the satisfying click you hear when legos merge, but you can build something nonetheless.

The Chinese can make anything, so what stops them from making the best Chinese Lego knockoffs, that too at pocket friendly rates! In this article, you’ll find some of the best lego sets that will keep you engrossed and entertained for hours, not to mention, satisfy your popular culture hoarding needs.

As the importance of this Star Wars Millennium Falcon vessel keeps growing, down from the trilogy to the 8 part series, it just gets even harder to keep your hands off of this masterpiece. The 1381 piece set is intricate, challenging and honestly, a work of art. If you have lego experience, you might be able to build it quickly. But it is completely possible that you take around 15 hours because that is just how complex the model is. If it’s a weekend and you are supposed to spend time with your girlfriend, make sure to take her permission.

The stud and knob on each block is a bit spaced out and not exactly like those on original legos, but they fit in like a clasp. Fun fact: the cockpit,  extinguisher and engine operation are fit with LED! Also, the cockpit area includes a block in a shape that hasn’t been seen before.

This one is easier to assemble than Millenium Falcon. The aircraft First Order Poe’s X-wing Fighter was featured in Star Wars: Episode VII The Force Awakens. The lego knockoff set comes with four shooters and opening wings. The 845 piece set is the perfect gift for your kids who are just getting into Star Wars fandom or for those who want to build a collection or memorabilia of Star Wars related merchandise. Just because you have quality and expensive tastes, doesn’t mean you need to go bankrupt.

The set also includes 2 stud shooters, opening wings, retractable landing gear, an opening cockpit that has seating space. Additionally, there is a loader included with a weapon rack, along with extra missiles and ammunition.  Now you are all geared up to recreate your favourite scenes from The Force Awakens!

The real Notre Dame may have fallen, the spree broken and the upper walls damaged, but it couldn’t hurt to think you’re creating your own little version of Notre Dame. Since it is being rebuilt anyway, giving it a whole new look, any way you want.

The whole set is 7000+ pieces, 7380 if I’m being precise. There is no detail left to chance. Somehow, this lego knockoff set includes its gothic, urbanic and religious look all in one. The manufacturers have used shape cognition technology to create the set in addition to making it safe for kids. The set is strong and sturdy, so it can be played with for a long time.

An interesting fact about Notre Dame: The church had started being built in 1163 and was constantly worked on until 1345. Compared to these 182 years, the few hours you’ll spend on building this church is quite impressive.

Any Harry Potter fans in the house? Then you’d know that the Astronomy Tower is the highest tower at Hogwarts. How do you feel about being a part of the construction crew of this tower? Grab this set and get to work! Now it’s not exactly and as complex as lego, but it does need to be assembled and put together.

What is an astronomy tower without a little bit of glow and lights telling us that it is meant for sighting stars in the night sky? Well, that is why, for that additional touch, you’ll find that the towers and the windows can be fitted with LED lights, and at the entrance, you can be greeted with a small Hedwig figurine.

If you haven’t seen or read Harry Potter yet, there’s a spoiler ahead and stop reading right now. Skip to the next product. Don’t let your kid reenact the scene of Dumbledore falling from the Astronomy Tower. DISCLAIMER: THAT IS NOT WHAT THIS IS FOR.

Let me tell you one thing: With this set in your hands, it is proof that you don’t need to be an architect to build something. I am in no way trying to undermine architects who spend years perfecting their art but building these lego sets requires skill. Patience, building anatomy and an eye for detail.

This seller sells lego knockoff sets of the most famous architectural wonders of the world, whether it’s the  Liuhe Pagoda of China or the Louvre of Paris.  The Twin Tower and The Golden Gate Bridge, among many others, come with landscaping around the body of the building, which of course you will have to create from scratch.

One thing to be noted, the body needs to be built from the inside out, therefore the set comes along with tiny little pieces, then mini pieces to outside regular-sized blocks that make the whole structure.

Your neighbourhood SWAT team is here to rescue you. Want to instil a sense of community duty or protectiveness in your child? Introduce him or her to the elaborate 715 piece police van that has it all.

Now, it is not bulletproof, but it sure resembles the tactical units you see cruising in the streets in cases of emergency. The van has got a gate in the back for your mini policemen to climb through, the side of the vehicle can be embellished with lego guns and the sides, the top and the back have translucent and glossy red building block pieces that do the job of the light.

To an ordinary eye, that is all, you probably don’t think it can change into something else. But guess what, it can take the shape of a man from the SWAT team and also an armoured airborne vehicle. Get creative!

If you didn’t shed a tear or two during the movie Titanic, I can spare you. But if you don’t shed an overwhelmed tear after the completion of the lego model of our very own RMS Titanic, I will be forced to assume you don’t appreciate art. This gigantic ship has been broken down into 1860 pieces, not the two halves (sheds a tear) to make this excellent lego knockoff model.

Now, you might not be able to sail this unsinkable ship, but it sure will look good on your mantel, especially after you assemble these eighteen hundred something pieces. Since all the pieces of the lego are micro blocks, you can see immense detailing in the deck, mast, sail and body of the ship. It’s pretty straightforward, so it might only take up to two hours to build it. But that’s what makes it the perfect playdate activity.

If you’re living in a city, urbanized area that is low in space, we understand how disheartening it can be that you child doesn’t have a treehouse. While a Lego-style model can’t really compensate for that, at least the children can roleplay and hang around and jump about from branch to branch in the treehouse, without actually being exposed to the danger of falling.

This 1013 lego set has got it all. It depicts a time somewhere between summer and autumn. From the gradation in the tree trunk and wooden style staircase to blossomed flowers, a pot cooking food on fire, and leaves swaying in the wind. This is one of the best Chinese Lego knock offs I have come across.

We know that Bumblebee was offed in G I Joe vs. Transformers, but what if I told you, you could make it come alive. All you need to do is assemble it. This 225 piece model also transforms into a vehicle resembling a  Volkswagen Beetle, the patent Bumblebee car. All the pieces in the set are self-locking and the hinges are strong, made of good quality plastic. It makes for an excellent toy and an even better gift, especially when you’re out of options.

This lego knockoff is great to complete your Transformers set. And if you don’t have one, you should really start. You can start with this. But you can find models of Optimus Prime and Megatron as well. 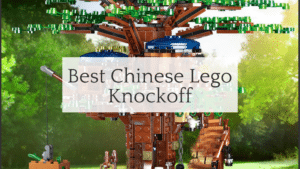 The Chinese can make anything, so what stops them from making the best Chinese Lego knockoffs, that too at pocket friendly rates! In this article, you’ll find some of the best lego sets that will keep you engrossed and entertained for hours, not to mention, satisfy your popular culture hoarding needs.

Where to Buy Chinese Welding Machine 2022

Are these Tik Tok Leggings worth it? And...

Boutique Wholesale Clothing in China 2022 – Where...

Buying Aliexpress Products And Ship To US Or...

@2022 - Bestchineseproducts.com. All Right Reserved.
You cannot copy content of this page