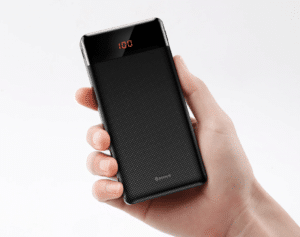 Everybody assumed that battery technology will get better and better and accessories such as power banks will cease to exist. But in 2020, we are still super dependent on power banks. Companies have jumped on the bandwagon and created some pretty amazing power banks. Today we cover the best power bank in 2020.

Included in this list are some amazing Chinese companies that offer the best power banks that are reasonably priced and of the highest quality.

Don’t OVERPAY for electronics when it’s all made in China!

Powerbanks for Everybody and Every Size!

Baseus is one of the most popular brands in China. They have grown over the years to establish themselves as the front runners in electronics accessories. We are starting off with the Baseus Wireless powerbank. Wireless tech has become the norm in recent years with many users opting to purchase wireless chargers. It’s the same thing with power banks. Why do you need to carry around a power bank that is connected via the USB, when you can have a wireless power bank that lets you charge without any wires.

This Qi Wireless charger has a 8000 mAh capacity. It comes in two colours, Black and Red. It also has an LCD display that gives you information on how much battery is left and so on.

It comes with connected levers, where you can charge your phone while watching a movie at the same time.

Miss the wired option? You can do that too. Charge one device wirelessly and simultaneously charge two other devices with a wire.

You don’t have to remove your thin case while charging with the Baseus Wireless Charger.

The glossy part of the power bank is what shows the battery percentage.

Now the special part about the 2 USB ports are, each come with a different power. USB 1 has 1A Current and USB2 has 2.1A current. So what does this mean?

This means this power bank is smart enough to know how much power can be pushed out to the device that is getting charged.

It weighs 230 grams and it can be placed in your pocket. It also supports charging while discharging, which means you can charge your power bank and at the same time, charge two other devices.

One of my favourite power banks of 2020 is the ones that are tiny and portable. We cover a few of these today and the first one is the Floveme Mini. This is a 10,000 mAh power bank which is the default, but the size of this device will surprise you.

It fits within the palm of your hand and it’s slightly bigger than the Zippo lighter that you see. This is a super good looking power bank. The only concern for a few people might be is the thickness of the power bank.

Here are its features.

It has dual USB ports, 1 Micro Input, 1 Lanyard Hole and 1 Power Switch. The Lanyard hole is a small hole that is put in devices around which you can tie a thread and use it as a carry-on. This makes the Floveme Mini 10000 mAh one of the best portable power banks going around.

The next power bank is a freak of manufacturing. It’s the smallest power bank I’ve seen in my life. Now the thing with small power banks is, they generally have very low battery capacity as well. This means they can charge your device for 30 odd minutes before it runs out. But this finger-sized power bank is pretty incredible.

It has 10000 mAh battery and you can completely conceal it in the palm of your hands when you close your hands.

The display on this power bank is on the side and it’s optimum use of space. The height is 8.5cm and the width is 6.0cm.

Moving on to the bigger power banks. The KUULA 20000 mAh is a powerhouse of a battery with a lot of features. It comes in two colours – Black and White.

The special aspect of this power bank is that it has 3 Inputs and 3 Outputs. Charging multiple devices and discharging while charging is not a concern with this power bank.

It has a LCD display that covers quite a bit of info. It displays real-time info of current and voltage. This power bank also supports fast charging.

The 18W power bank is so powerful it can charge the MacBook during an emergency. The PD quick charge technology on the Baseus 20000 mAh ensures that the charge lasts for longer and does not discharge too quickly.

Most 20000 mAh power banks are big in size because they need to have a massive battery capacity to accommodate multiple charging. But they are often very bulky. If you take the Xiaomi 20000 mAh battery, for example, it has a thickness of a notebook and it’s pretty long too. Considering that, the Ugreen 20000 mAh is a breath of fresh air.

It’s a portable power bank that can be easily carried and fits in your pocket. The battery capacity is so good that one can charge an iPhone XR 5.1 times and an iPhone 8 about 8 times with the Ugreen 20000 mAh power bank.

There is a dual USB port, which means two times the output. It has a power indicator, which isn’t as good as a digital display, but it still informs.

Another awesome power bank is the Romoss 30000 mAh. This is a beast of a power bank. At the outset, this is a pretty big power bank and very thick. But this is more of a multi-device power backup instead of a power bank which works for emergencies.

One entire day of charging the Romoss 30000 mAh gives you one entire week of use.

If you are looking for a super power of a power bank that can power more than just a smartphone a few times, then Aliexpress sells the ALLPOWERS 50000 mAh powerbank.

This power bank can be fully charged in about 8 hours. It works as a generator and is perfect for camping and long-trips. It has a wireless charging option as well.

The digital display lets you know about the power backup left in the powerbank. It can charge an iPhone 8 about 14 times.

Finally, the LED torch can be used as a temporary torch light when you are out in the night.

Last in the list is a very unique power bank. The Solar Power Bank as the name suggests is power bank that can be powered by solar as well as normal electricity. This is a truly unique device that has numerous features that we will get to.

This is a pretty thick power bank that has a solar receiver on one side. So when you let it out on the sun, it starts charging. The power bank also informs you if it is charging through solar (Green Light) or USB charging (Blue Light)

It has 2 Outputs, 1 input and a very strong LED torch that can be used in very dark environments. It also has a SOS feature, where the light blinks. Attached to the power bank is a compass.

This power bank is also waterproof and is perfect for rugged travels out in the wild.

The Caseier brand on Aliexpress has become one of the top destinations for powerbanks. The 10000 mAh is the cheapest powerbank for the battery level costing only $10 and it’s also the tiniest. You can hold it between your fingers.

It has a flashlight option and two devices can be charged simultaneously. It comes with a 22cm charging cable that is attached to the powerbank which is pretty nifty.

Which watt power bank is best?

A power bank with a minimum 1000 mAh to 2000 mAh minimum is a great power bank to keep your phone charged for at least 4-5 hours.

How does a Power Bank work?

Power bank is required to change electronic devices and keep it handy while travelling or staying remote from the plugs. Power banks work in an extremely simple way. The power is stored inside the battery through a USB charger. You’ve to connect your phone or any electronic device to the USB port and switch on the power bank to transfer charge.

How do I choose a good power bank?

Power banks are extremely essential for charging your phones when you cannot reach out to the plug and do your work simultaneously. Here’s how to choose a good power bank.

Charge Capacity: Think of what devices need to be charged from the power bank as some devices take in more charge than others. A power bank with 1500-2000 mAh is decent for phones while it’ll need a lot more for tablets, iPads etc.

Power Output Charge Current: It’s important to note the rate of charge delivery. Many power banks have good charging capacity but it takes time. So if you have more than 1 device. You’ll have to plan the charging accordingly.

No. of Ports: It’s best to get power banks with the most number of ports as you’ll never know which and what device you might need to charge. Check the output current capability of each port to find out if they’re enough or not.

Size & Weight: It’s important to consider the weight and size of the power bank if you’re using it for travelling.

How do you choose a power bank on Aliexpress?

See the reviews of the seller. Most seller come and go but those established sellers with the best reviews remain on Aliexpress will offer the best products. Alternatively go for the best chinese power bank brands like Anker, Baseus and Xiaomi.

What is the highest capacity power bank?

26,800 PD. But this high capacity power banks are banned to take up on flight.

How long does it take to ship the power bank to my country if I buy from Aliexpress.

Go for good brands like Baseus, Anker and UGreen. They have dedicated packing team that will ship your product once you have paid for the item. Bear in mind, it all depends where you are located and most important of all there may have custom tax duty fees.

The answer is simple, there isn’t just one. There are many China-based power bank manufacturers who make high-quality power banks that come at various prices, shapes, sizes and also with various features like Solar Powered, Wireless and more.

85 Top Brands and Sellers on Aliexpress |...

Boutique Wholesale Clothing in China 2022 – Where...

Buying Aliexpress Products And Ship To US Or...